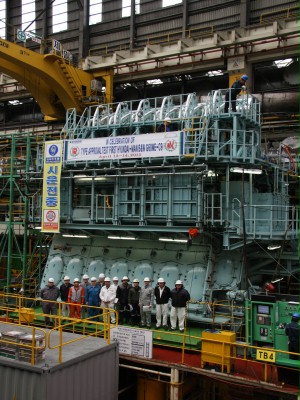 At the end of April, 2013 in Korea, MAN Diesel & Turbo’s latest G-type engine passed its Type Approval Test at HHI-EMD, the engine and machinery division of Hyundai Heavy Industries. The ultra-long-stroke G60ME-C9 engine went through its paces under the watchful eye of many interested observers, including representatives from the major classification societies.

Christian O. Rasmussen, Head of Classification Business, MAN Diesel & Turbo, praised the collaboration between his company and HHI-EMD and said: “Our 600-mm bore engines have enjoyed much market success because of their reliability. The new G-type continues this legacy, as confirmed by the successful TAT here in Korea.”

He continued: “The G60 engine represents the culmination of many years’ development work. In these uncertain times for the shipping industry, MAN Diesel & Turbo sees significant opportunities arising for G60 as fuel prices continue to rise.”

MAN Diesel & Turbo reports having close to 200 G-type engines on order, spread over a broad spectrum of applications and a number of different licensees – with HHI-EMD leading the field – and states that it has the fastest market acceptance any engine series in the MAN B&W portfolio has ever received.

The engine is due to power a tanker owned by Istanbul-based Densa Tankers, the international ship management and chartering company specialising in oil and chemical tankers. The vessel will be managed by Thome, the Singapore-based provider of global, integrated ship management services.

G-type efficiency
G-type engines’ longer stroke results in a lower rpm for the engine driving the propeller. This lower optimum engine speed allows the use of a larger propeller and is, ultimately, significantly more efficient in terms of engine propulsion. Together with an optimised engine design, this reduces fuel consumption and reduces CO2 emissions.